This is going to be a long, and sometimes hard, one. I’ve been reading a lot of blog posts about race and racism lately, all of them great and all of them by women of colour. In particular I’ve been reading Mochamomma’s blog in which she’s discussed the unicorn cake debacle, and the “ask a black girl” phenomenon.

One of the things that has come up again and again is how rare it is for white women to blog about race and racism.

Race and racism have been at the front of my mind for most of my life. As a white girl who grew up in rural Ontario the only people of colour I knew as a child were the Japanese boy in my class and the Trinidadian fruit pickers who worked on a nearby farm.

But, I also grew up with a Quaker hippie mom (of the social justice and political action variety rather than the pot smoking free love variety). I had a strong awareness of the existence of racial bigotry but had yet to witness it.

All of that changed when I was thirteen and spending my summers in St. Catharines with my best friend.

I have spent a lot of time thinking about whether or not I would tell the whole truth here. I realize that I am opening myself up to some serious judgment and anger. All I can say is, I was thirteen and I only had one friend so where she went, I went.

This is what you need to know about St. Catharines in the 80’s and 90’s: It was a breeding ground for neo-nazi skinheads. The teenagers were all neatly divided into their little boxes, especially the freaks. You had boneheads (distinct from the anti-racist skinheads), mods, hippies and punks. I was none of the above but I was definitely a freak. I also had no idea how to meet new people on my own. My best friend, however was a striking mod chick much admired by many . When she started dating a nazi punk I wound up spending a lot of time around him and his friends. I hated it but I didn’t know how to avoid it without alienating someone who meant so much to me (to her credit, the boyfriend in question gave up his Nazi ways in the time they were together).

For the most part I left the room any time they started talking their bullshit. Occasionally I took them to task only to be dazzled by the bizarre twists of “logic” they offered in defence of their views.

Eventually I was able to make other friends and stop spending time in the company of boneheads. But, honestly, I can’t say I regret that time because it taught me something about hate and hate groups that I don’t think I would have otherwise understood. Sometimes it’s good to spend some time behind enemy lines.

One thing I learned from that experience was that these people are people, they’re not monsters. Making them monsters makes it too easy to distance our selves and society from their beliefs and their actions. When we recognize that they are people we have to also examine how they came to be that way, because they sure as hell didn’t just spring from the head of Ernst Zundel like Athena from Zeus.

When I was sixteen I left home and moved to St. Catharines to finish high school. There were still plenty of boneheads but my new friends were very vocal anti-racists who had had the shit kicked out of them more than once by boneheads. I saw how ineffective it was to piss them off and I felt the fear of being chased by them. I even had them move in next door to me. After that my best friend (a different one by this time) who was Filipino refused to come to my apartment, and who can blame her? If that’s what they do to white people, what might the do to her? I had to call the cops one night because one them was pounding on my door screaming “Fucking faggot!!” at my friend who was visiting.

Most people’s experience of racism is not so dramatic. It’s the systemic racism of the criminal justice system or the unfair hiring practices of a workplace. It’s the subtle shifts in attitude when a person of colour walks into the room. It’s the throw away comments that people don’t think twice about. It’s the luxury of “not seeing race” because you can’t “see” your whiteness. It’s the wilful blindness of white people when they talk about how inspiring and heart-warming the latest edition of the white saviour trope was.

I still come to tears when I remember how volatile it was back then. How much a fabric of our daily lives it was that one of us could get beaten down at any time. I was there when my friend was attacked by five guys in steel toe boots and I was there to watch him get twisted into his own brand of hate, indiscriminately accusing people of being nazis, and even terrorizing their families.

I learned what unfettered hate looks like. And I understood that this was a natural consequence of the much subtler and more pernicious kind of racism that was a part of the very fabric of our culture. And aren’t those radical neo-nazis a perfect distraction from the much more insidious racism that affects people of colour on a daily basis?

You know what? I can identify a nazi skinhead in my sleep. I know how to tell a nazi punk from the rest of ‘em, no problem. You know what that means? It means I know where I fucking stand. It means that when I see those white laces and the iron cross on your jacket I know not to make eye contact and steer clear.

But when my coiffed middle class (white) boss at my minimum wage job starts talking about “chinamen” that’s a hole other bag of shit. That’s a blind side from someone in a position of authority and I am left speechless, because I need this job.

One of my favourite profs in University was Andrew Winston whose research focuses on the role that social science and science have played in perpetuating racial stereotypes and racist policies (that’s a simplification but you get the gist). In intro psych we were assigned a book called “The Race Gallery” by Marek Kohn which outlined the history and the flawed science of race based research, particularly in the area of racial classification and intelligence. My take away from that book was that race is a social construct rather than a biological fact. However, and this is the important part, just because something is a social construct doesn’t mean it’s not real.

Race is real because it affects the identities and realities of everyone. Not just people of colour, everyone. Whiteness is not a blank slate, it is not the de facto absence of racial identity any more than maleness is the de facto absence of gender. The issue, for any thinking white person, is how do you inhabit and experience your whiteness? What does it mean to you to hold a racial identity that comes with so much privilege? What can you do to recognize your privilege and address it in a meaningful way? And if you answer that question with anything that sounds like, “Well I’m X so I’m oppressed too” you’re missing the point. Identity is a complicated and ever shifting thing. If you engage in the “more oppressed than thou” game everyone loses. The point is to think consciously and openly about what kind of privilege you benefit from and what that means.

Talking about race is hard, for everybody. But the difference is that white folk have the luxury, or shall we say privilege, of not thinking or talking about it. If you, as a white person, don’t notice that everyone in the room/film/book is white it’s not because you’re so progressive that you’re colour blind, it’s because you’re simply blind to the ways in which people of colour are simultaneously erased and problematically defined by those representations. If everyone in the room is white, why is that? How does that change the nature of the discussion? How does that affect the way people behave to one another? All too often an all or mostly white space is seen as a safe space to say ignorant or flat out hateful things.


Update: I've since written a follow up post on why it matters that white people talk about racism.
Posted by Kristin Craig Lai at 3:21 PM 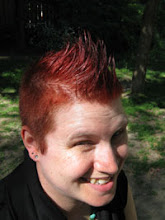 Check out my other blogs

Kristin Craig Lai - Life Coach for queer parents
Reflections on parenting through the eyes of a coach.

Eat This
Vegetarian recipes crafted by yours truly. Focused on cooking from scratch with real food.